The ratio questions in the new GCSE Maths exams have drawn my attention to a particular skill: setting up equations and functions by using pairs of equivalent ratios.  To be honest, I had never explicitly taught students how to do this when studying for the old GCSEs.  However, knowing how to set up equations and functions can helpful for all sorts of ratio problems in the new GCSEs.  For some examples of these, see Jo Morgan’s blog post from December 2017.

So I’ve been looking at ways to teach this and been thinking about various ways that classes can approach this skill.  The process itself is pretty easy to perform (see point 6 at the end of this post), but in what ways can students make sense of the process?  What prior knowledge can students use to think with when first learning how it works?

This blog post discusses a handful of different ways that students can think about this task. Some of the ways are clunkier than others. Some of them share the same method but have slightly different reasoning behind them.  I’m not sure yet which ones are the best to use, or whether it depends more so on the prior knowledge students are most secure with.  But here they are…

1. Thinking about it with function machines

I think that out of all the approaches discussed in this post, this one is probably the most cumbersome! However, if students are already experienced with using function machines to make sense of expressions, equations and linear functions, then that same knowledge could be applied to this ratio skill.

For example, my Year 7 classes often work with function machine when learning about algebraic expressions, such as these:

And they may also see function machines in questions like this:

While this question has infinitely many solutions, here are two fairly straight forward responses:

These two questions involving function machines could be combined together in order to think about a way of writing x:y=4:3 as a linear function.  In this case, the task is to consider how to get from the first part of the ratio in 4:3 to the second part and then apply the same thing to x:y.  This could be done by using either of the solutions above.  Here’s the first one:

And here’s the second:

One student this year took it upon himself to do something a little different with this.  We had previously been practising writing ratios in the form 1:n and n:1, so he decided to start each question by writing the numerical ratio in the form 1:n before making a function machine.  He told me he did this so that he would only need to use one box for the function machine instead of two, which I thought was quite creative!

2. Thinking about the multipliers within the ratios

This is arguably just a more sophisticated version of the method above, but with a different way of thinking about it.  A class could work on the principle that if two ratios are equivalent, then the multipliers that get you from one part to another within the ratios will be the same.  For example, students may already be familiar with arguments like this for why the ratios 4:12 and 20:60 are equivalent…

We can see that the two ratio are equivalent because the second part is 3 times the first part in each.  The multiplier of 3 for each ratio comes from dividing the second part by the first.  This can be generalised to the following:

Students can think about the same principle to write x:y=4:3 as a linear function:

3. Thinking about the multipliers between the ratios

We can also take the same principle as in the previous approach and apply it in a different direction.  If two ratios are equivalent, then not only are the multiplier within the ratios equal but so are the multipliers between their corresponding parts.  For example:

This could be generalised to the following:

This can be used to write x:y=4:3 as a linear function in the following way:

So far, I’ve found that my students seem more comfortable using this approach than the previous one because it places both variables on the numerator before they start rearranging.  I also personally prefer it because it shows where the shortcut method comes from (at the end of this post) more clearly than when equating the multipliers within the ratios.

4. Thinking about each part as fractions of the whole.

Students may have previously learned to convert between ratios and fractions in various ways (there’s a nice activity for this on VariationTheory.com).   So a different approach towards making functions out of ratios could be to consider each part of a ratio as a fraction of the whole.   For example, students may have previously learned to do the following with numerical ratios: 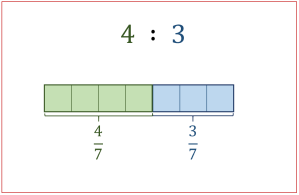 They may have even learned to generalise this using algebraic ratios. 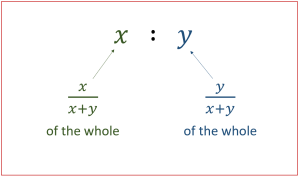 Therefore, if 4:3 is equivalent to x:y then we can equate the fractions for the first part of each ratio:

Or we could equate the fractions for the second part of each ratio:

An advantage for this approach is that students could do it one way and then check their answer by doing it the other way to see if they get the same solution.  A thing to be cautious about with this approach is that it demands slightly more advanced rearranging skills than either of the two methods before it, in order to deal with the two terms on the denominator.

5. Thinking about how to make the two parts equal

Therefore students could consider, “How could we manipulate these parts so that they are equal to each other?”  In the case of the bar model, they are thinking about how to make the bars the same length.  They can do that by using three lots of x and four lots of y.

The quickest and easiest way to write x:y=4:3 as a function is probably to just multiply diagonally across them. 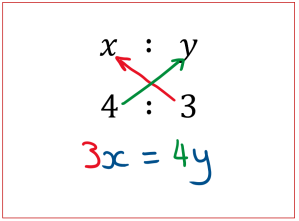 For me personally, this is what I ultimately want my students to do when they are making functions or equations to solve bigger problems.  While the other approaches aim to develop understanding through prior knowledge, this method seems more efficient to perform. However, I probably wouldn’t choose to start with this shortcut method because isn’t immediately obvious why we multiply across diagonally.  Without understanding how and why this method works, I also reckon it would be more tempting to make the mistake of multiplying the corresponding parts together to get 4x = 3y.  Therefore, my preference so far has been to start a class with one or more (or all) of the other approaches, use it to lead to the shortcut method and then use that from there.  Undoubtably, there are plenty of other ways to approach making functions and equations out of pairs of ratios, which I’ll continue to look out for in the future.

If you would like to use or share any of the images from this blog, feel free to use this Power Point to help you: Thinking About Ratios and Algebra