When I used to look for practice exercises to use in lessons, I mostly concentrated on finding sets of questions that matched the topic I was teaching.  For example, for lessons about areas of parallelograms, I would look for sets of questions about areas of parallelograms.  It seemed like a fairly straight forward thing to do! However, at the time, I didn’t appreciate how the designs of questions (or sequences of questions) can affect what students think about while they are working. Carefully considered questions can direct attention towards important specifics of a topic, while exercises that aren’t carefully considered can lead to students overlooking key points.

For example, let’s consider lessons that focus on finding areas of parallelograms. Once a class has reached the point where they have established that the formula is base x height, the teacher may then want to set them some practice questions on that skill.  What options are available?  What things might a teacher want students to pay attention to and think about while they are working?

Below is a practice exercise that I dug out of my resource box from a long time ago.  Looking back on this now, I’d argue that students would be able to complete this exercise while ignoring several important points that are pertinent to the purpose of the lesson.

The first thing that student might not pay much attention to is the instruction line at the top.  They only really need to read this once because every question requires the same thing.  So after reading it to begin the first question, they might not read the word “area” again for the remainder of the practice – meaning the exercise looks more like the picture below.  Arguably, this could result in students not thinking very much about how the process they are using is for calculating area (in oppose to perimeter, for instance).

Another thing that students might not consider is which lengths are appropriate for the formula and that they need to be perpendicular.  Why would they think about this when every question provides only the two numbers they need?  In this case, the students may only be attending to the details that remain in the picture below.

However, even these are surplus to requirements for this exercise.  Little attention needs to be paid towards the units because they are all cm.  Students can ignore the units and safely assume that all answers will be in square centimetres.

One could even go so far to argue that, with all questions being parallelograms, students don’t really need to pay much attention to what shape they’re dealing with either.  Every question requires the same process: multiply the base by the height (or in this case, just multiply the two numbers you see).  Therefore, students might not think very much about the association between the formula they are using and the shape they are using it for. From the students’ perspective, the most important thing for them to attend to in each question is the pair of numbers provided.

In a worst case scenario, what was intended to be practice on calculating areas of parallelograms may end up just being ‘times tables’ practice instead.

I’ve painted a fairly gloomy picture that is likely to be over the top and unrealistic!  However, despite the hyperbole, it aims to highlight the importance of carefully considering the purpose behind questions that are used for practice.  I’ve learned that simply selecting a set of questions that matches a topic might not match my intentions for practice.

So what things might I want students to think about while they are practising calculating areas of parallelograms?  And how might I direct their attention towards those things?

Getting students to think about how the lengths used in the formula need to be perpendicular:

A teacher might not want to go too complex with this too quickly and may want to first start students off with some fairly safe questions, like the ones below.  These questions don’t provide much opportunity for the students to go wrong, but gently guide students through some of the ways that the positioning of the lengths can vary.  After answering the first question, the second question aims to demonstrate how the height can be labelled outside of the parallelogram, while the third one shows that the measurements don’t always need to be horizontal and vertical.

Once students have got to grips with this, they might next turn their attention towards selecting appropriate lengths and rejecting lengths that are not useful for calculating the area.  This could be done by labelling each parallelogram with more than two lengths, like in the examples below.

While the first question eases students in by using a familiar orientation for the measurements (horizontal and vertical), the second question changes that up by requiring two lengths that appear diagonally on the page.  The third question provides students with four measurements to choose from and can be solved in more than one way.

However, it might be that a teacher wants to shift the emphasis of the task away from computation and more towards reasoning with what lengths can be used and what lengths should be rejected.  In this case, questions such as the ones below may serve that purpose.  I’ve found that students tend to find questions like the third one the most unsettling.  This is because they are not asked to calculate the actual area and can’t calculate it with the information provided.   Therefore, the requirements of the question lie firmly in explaining that the 9 cm and 11 cm aren’t perpendicular to each other.

A different way of encouraging students to think about finding perpendicular lengths could be by getting them to measure parallelograms for themselves, such as in the examples below.

I tend to see that students find the first two questions easier than the third one.  I think this is because they can measure the distance between the top and bottom side in the first question by laying their ruler vertically through the middle of the parallelogram.  Similar for the second one, but with a bit of turning.  However, the way that the third parallelogram slants prevents them from adjoining the top and bottom sides in the same way.

Therefore, they need to be a bit more creative with how they obtain the two perpendicular measurements.

Another interesting way to get students to think about the relationship between the base and the height is to get students to draw their own parallelograms that meet certain stipulations.  For example, the question below invites mistakes and potential discussion by its choice of numbers.

It could be tempting to approach this question by trying to find a factor pair of 24 that adds up to 22 (such as 3 and 8).  However, students have to remind themselves that areas of parallelograms aren’t calculated by multiplying the adjacent sides.  For more questions that get students to think about this distinction, see my recommendation at the end of the post.

Getting students to think about how the degree of slant doesn’t change the area:

One way to address this could be by comparing parallelograms that have the same area but look different because of how they slant, such as in the example below.  A variation for this could be for a teacher to first display the two parallelograms without the rulers, ask the class to discuss the question and vote, then display the rulers and ask the class discuss and vote again.

Working on this idea also provides opportunities to refer back to the relationship between parallelograms and rectangles (which may have been their starting point for learning the formula for parallelograms).

Having a good grasps on this matter makes questions such as the one below much easier.  Students sometimes go the long way round with questions like this, by first calculating the height of the rectangle (8 cm), transferring that to the height of the parallelogram and then multiplying 5 by 8 to get the area of the parallelogram.  While other students instantly recognise that the area of the two shapes are equal.

Getting students to think about the associations between each shape and its area formula:

Once students have learned how to calculate areas for a few shapes, I sometimes find that they then start to mix up the different formulae. They may not have had to think about formula selection so much during the practice exercises that just dealt with parallelograms alone.  Therefore, it can be helpful for them to practice recalling and choosing appropriate formulae for different shapes, so that they concentrate on associating each shape with its’ formula.

The picture below tries to exemplify this by providing a mixture of rectangles, squares, triangles and parallelograms in one practice exercise.  The first three questions aim to give students a bit of a “run up” by using the same orientations.  However, curve balls can be thrown to encourage students to concentrate harder on determining each shape and its’ formula.  For example, students can sometimes mistake a square like in the fourth question for a rhombus.  Also, the parallelogram in the last question is trying very hard to look like the triangle in the question before it! 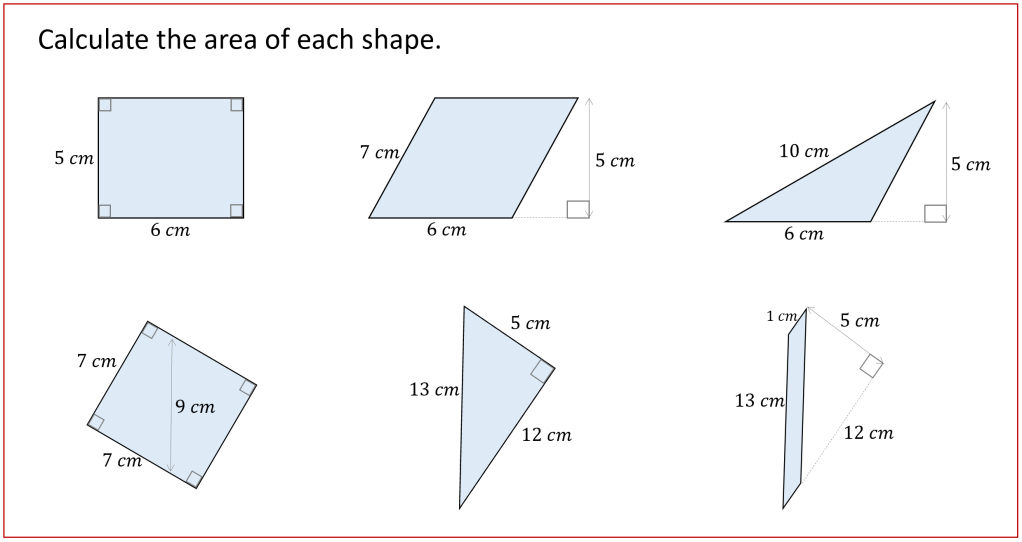 If you would like to use or share any of the images from this blog, feel free to use this Power Point to help you: Thinking About Areas of Parallelograms