Out of all the training sessions I’ve attended, two quotes in particular have stuck with me and affected how I approach lesson planning. These were from separate presentations but address a similar issue:

“Memory is the residue of thought. Or in other words, people remember what they think about.” (This presenter was talking about Daniel Willingham’s book).

Since hearing these, I’ve been looking back over my old lesson resources and considering “What are students likely to think about while answering these questions?” This next series of posts share some thoughts on this question.

One topic that bugged me as a teacher for a long time was ‘corresponding and alternate angles’!  It seems like it should be a fairly straight forward topic, so it frustrated me that students often dropped marks on it in exams.  They tended to be okay at working out missing angles, but failed to provide accurate reasons for their answers.  In the follow-up lessons after the exams, I’d find that the class remembered that certain angles on parallel lines were equal but had completely forgotten the words ‘corresponding’ and ‘alternate’  and what they meant.

So I had a dig around through my old resources and for each one considered “What would students be likely to think about during this activity?”  One of my earliest lesson files for introducing corresponding angles contained the set of questions below, which I had taken from the internet.  From what I remember, this exercise was fairly typical for what would come up when Googling “corresponding angles worksheet” at that time.

Looking back on this resource, I’m not sure it was the most appropriate set of questions for this lessons.  It’s not that the questions themselves are bad, they just didn’t suit my purpose for that lesson.  The new content that students were learning was the concept of corresponding angles, so I wanted students to think about the phrase ‘corresponding angles’ and its meaning.   But it is more likely that this exercise just got students to think “Is the answer the same as this number? Or do I need to subtract it from 180?”  While this might be useful later on, it wasn’t what I wanted at this point of introduction.

Since then, I’ve been looking for alternatives to such a numerically focused exercise.  In particular, I’ve tried to find activities that encourage students to think about the meaning of corresponding angles in lots of different ways.

For example, one task could be to present students with pairs of angles and ask them to consider “Are these angles corresponding or not?”  The questions below require students to compare examples with non-examples so that they can learn to discriminate between them.  While doing this, I would insist that students wrote the words ‘corresponding’ or ‘not corresponding’ rather than just putting ticks or crosses, so that they keep mentally pairing the word with its meaning.

Once they’ve practised evaluating pairs of angles, a follow-up task could approach the concept from the opposite direction.  The questions below provide students with one angle and then asks them to think “Which angles correspond with this one?”

Alternatively (or subsequently) students could be challenged with a slightly more open task.  Rather than focusing on just one angle at a time, like with the questions above, the next exercise requires students to consider “Which angles correspond with each other?”  My classes have found this task more difficult than the last one because it requires three letter notation, and because they don’t initially know how many pairs of corresponding angles they are looking for in each diagram.

In all of the exercises above, the questions have been restricted to looking at corresponding angles on parallel lines.  But the lines don’t have to be parallel.  For example, that first exercise could have looked like this: 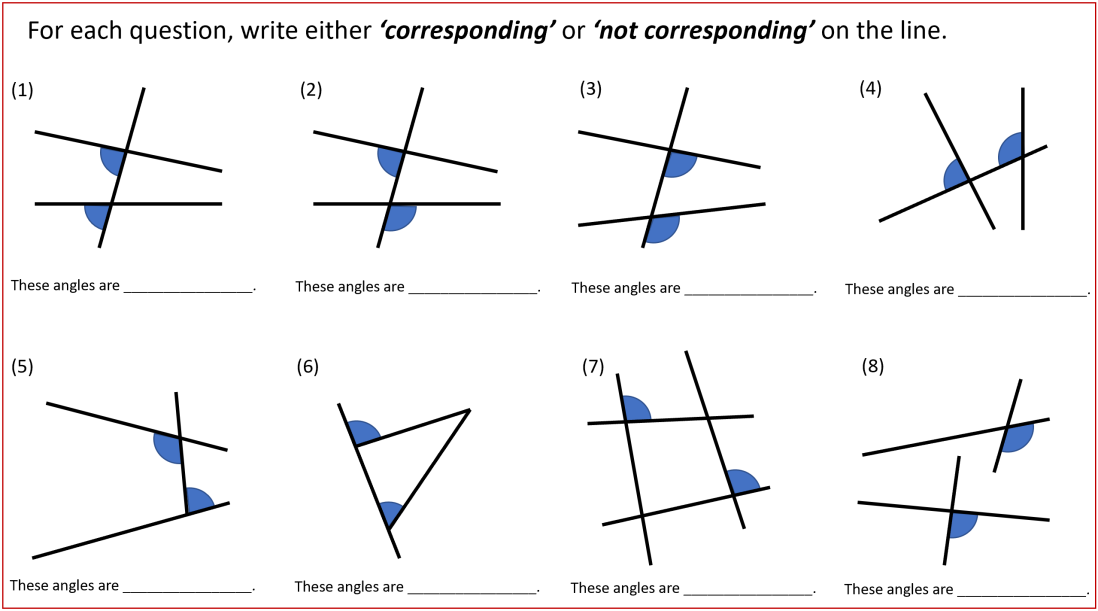 This opened up a new alternative for how to include numerical examples while still keeping the focus firmly on corresponding angles.  For example, rather providing students with a pair of parallel lines and asking them to find a missing angle, they could be provided with the angles and be asked to decide whether or not the lines are parallel.  The intention for the task below is to encourage students to think “If the lines are parallel then the corresponding angles will be equal.”

If you would like to use or share any of the images from this blog, feel free to use this Power Point to help you: Thinking About Corresponding Angles