Three years after visiting Shanghai, what has stuck with me? (Part 3)

In 2015, my colleague (@Carohami) and I took part in an England-China teacher exchange programme, organised by the Maths Hubs.  In this series of posts, I reflect on some of the things that have stuck with me over the last three years.

The second leg of the England-China exchange involved two teachers from Shanghai visiting England for a month and teaching some of our classes in Halifax.   In this post, I’d like to present an account of what happened during a lesson with a Year 7 class on adding negative numbers.

That done, the teacher and students used this representation to explore addition of two numbers.  Each addition in this set of introductory questions used the numbers 5 and 3, while incorporating every combination of positives and negatives.  The students drafted ideas on mini whiteboards (this was the first time the teacher had used mini whiteboards) and the teacher drew a copy of each diagram on the main board.

The teacher was keen that drawing diagrams didn’t become the method that students used to solve additions with negative numbers.  So the teacher then used the diagrams from the board to highlight key features and derive generalisations.  The aim was for students to know and understand rules that would help them to calculate additions quickly in their heads.

The first key feature discussed was how sometimes both arrows pointed in the same direction and made one long path, while other times they pointed in opposite directions and overlapped.  This led to the realisation that when the two numbers in the addition have the same sign, the two arrows will continue on from one another.  Therefore, when the two numbers have the same signs then the solution to the addition will contain the sum of those two numbers (putting the negative and positive aside for a minute). A more precise way to describe this could be that the absolute value of the solution will be equal to the sum of the absolute values of each number – but this terminology wasn’t used in this Y7 lesson. 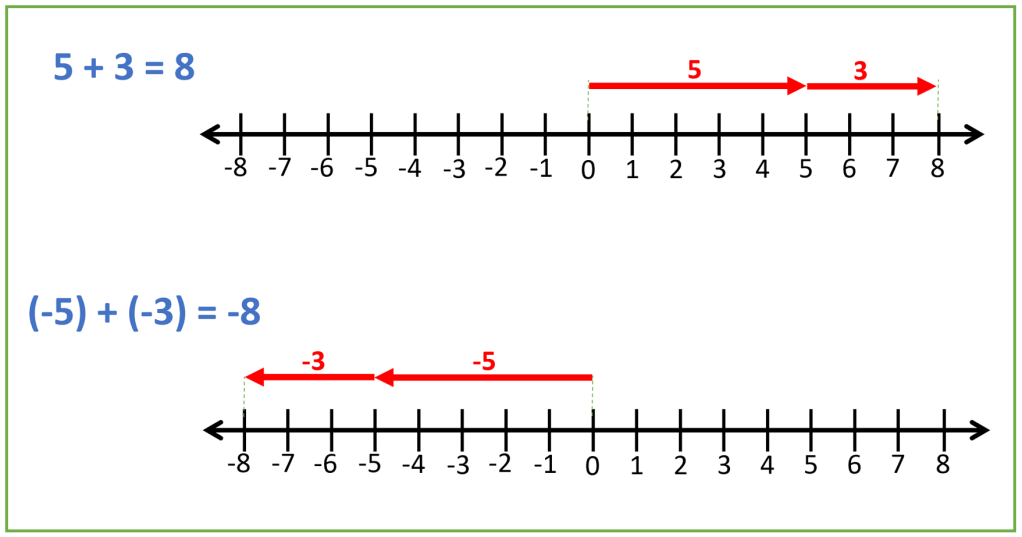 Next: how to decide whether the total will be positive or negative?  They started by looking at cases where the answer they got was positive. It seemed fairly obvious that if both numbers in the addition are positive then the total would be positive.  But how about if one is positive and the other is negative? 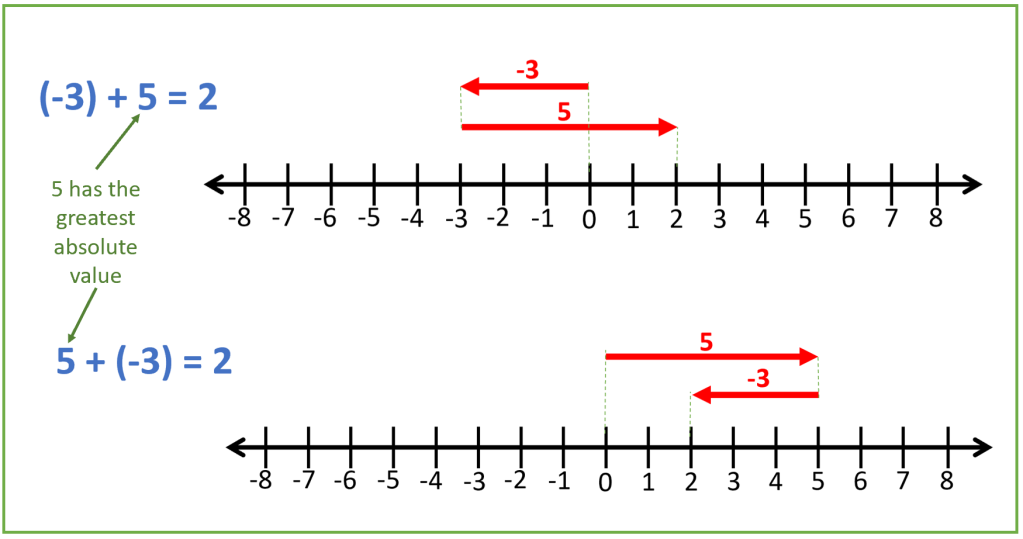 In both of these pictures, they could see that the answers they got were positive because the longest arrows were travelling in the positive direction.  Then onto cases where the total was negative…

These pictures show that the answers they got were negative because the longest arrows were negative.  This led to the conclusion that the total from an addition of two numbers will always share the same as the number with the greatest absolute value.  This all got summarised into three rules for working mentally:

Once these rules were established and seemingly understood by the students, the remaining time of the lesson was given over to practising adding with negative numbers abstractly.  The first few questions were answered by the class one at a time on mini-whiteboards; the rest were done independently in books.

What struck many of us who saw this lesson was the strong emphasis on using tricks or rules to calculate abstractly.  The very first time I taught negative numbers, I taught it completely abstractly using rules and found that students kept forgetting the rules or would get them mixed up.  The following year, I endeavoured to teach the concept for deeper understanding by using number lines (although I tended to represent calculations on the number line as ‘starting number’ and ‘movement’).  This time, students appeared to understand what was going on, but they ended up relying on the number lines so much that they struggled to break away from them.  The number line ended up becoming their method to calculate with negative numbers.  This made performing mental calculations troublesome.

What I found interesting about the Shanghai teacher’s lesson was the relationship between diagrams and mental methods.  The purpose of drawing diagrams was never to get answers.  They were not used as a method; they were used to illustrate a method.  It was clear to the class that the end goal was to be able to calculate addition with negative numbers mentally and the diagrams were a vehicle to get them there.

If you would like to use or share any of the images from this blog, feel free to use this Power Point to help you: A Shanghai Lesson on Adding Negative Numbers