Part 1 of this post, Many Methods: One Topic (Part 1), discussed how learning multiple methods for solving a problem can help students to become flexible mathematicians. This is especially important when their usual “go to” method would be harder to use than alternative ones.  This post (Part 2) looks at how methods that may look  different can in fact be very similar. Furthermore, comparing multiple methods can allow students to see the connections between them and lead them to understand broader principles of mathematics.

To exemplify this, let’s use a recent lesson on calculating angles for a pie chart…

The lesson started with the following four questions: 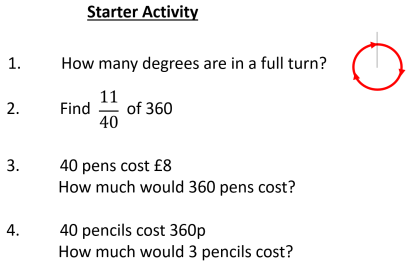 These questions were chosen to recap key skills and prime students for the lesson ahead.  The numbers in the questions match the numbers in the upcoming pie chart so that links between the different topics can be made extra clear.  For more on these kinds of starters, see my previous post: Crafty Starter Activities.

The class already knew what pie charts were and what they could be used for.  So, after a little bit of preamble, the class were presented with data from a survey about favourite instruments to play:

This wasn’t the most meaningful set of data, but it had been engineered to allow students to learn the skills before applying them to more realistic examples.

They were asked to think about how they could use things that they had previously learned to find ways of calculating the angles for each sector. Initially they did this on their own, without help, while the teacher monitored what they were trying out.  The teacher then picked some students to transfer their methods onto the board for class discussion. This is what they came up with…

Method 1 (fractions of 360): some students wrote each group as a fraction of the total frequency and then found that fraction of 360 degrees (relating to Q2 from the starter). 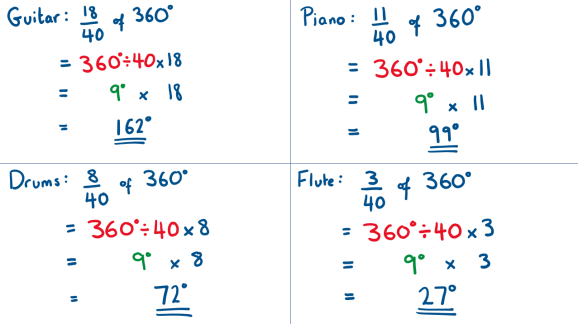 Method 2 (unitary method): some students calculated the angle for a single person and then multiplied that by the frequency of each group (relating to Q4 from the starter). 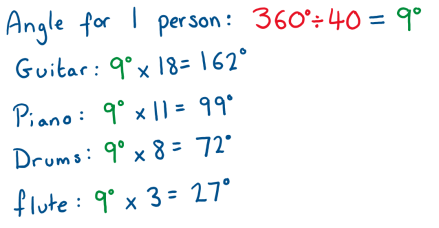 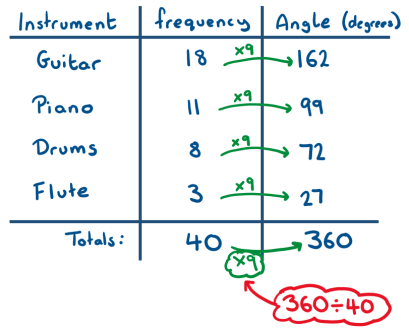 These three most popular methods had been anticipated by the teacher before the lesson and included in the lessons plan.  In fact, the starter activity was planned to plant these ideas in their heads. However, one student came up with a fourth method that hadn’t been anticipated… 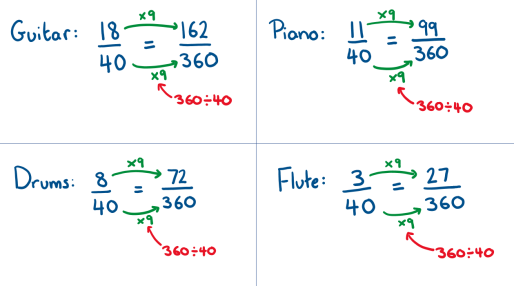 Once all four methods had been written on the board, the class were then asked the following:
Question: What do all these methods have in common?
Response: In each method we ended up multiplying each frequency by 9.
Question: Where did that 9 come from?
Response: For each method, we started by doing 360 divided by 40.

These commonalities were made apparent by the use of colour in the board work.   By discussing these points, students could see how the steps for each method were identical. All four methods may have looked different and used different ideas, but the calculations were the same. They were then asked some more questions…

If I was to give you a different table of data, how would your calculations change?
Would any numbers would remain the same?
Which numbers would be different?
How would you know what these new numbers are?
Can you describe a step-by-step procedure for what you would do?

This, in time, led to the students agreeing on a single, big idea that underpinned all four methods:

To calculate the angles for a pie chart, you can divide 360 degrees by the total frequency and then multiply that answer by the frequency for each group.

This idea of solving a problem with multiple methods and then comparing them was something that I saw a lot during a trip to schools in Tokyo.  In most lessons, the class would solve a problem in multiple ways and share them with each other.  But the conclusion of the lesson was never, “You can use any of these ways to solve problems like this.”  The lessons always continued to discuss the methods in-depth until a bigger learning point was found.  This pie charts lesson was an attempt to replicate this style of lesson in Halifax. 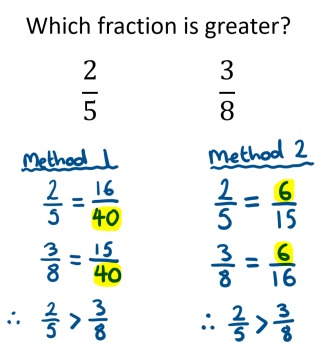 Rather than viewing these as two different methods, they could be combined to create one overarching idea:

We can compare fractions by making one of the parts the same in each.

But this could be broadened out even more to apply to other topics:

We can compare proportions by making one of the parts the same in each. 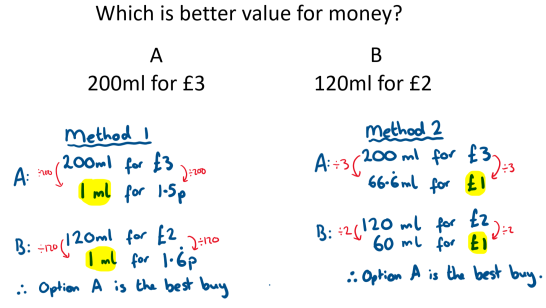 Percentages are often used to standardise information to be out of 100:

And even speed.  Calculating the speeds in metres per second allows us to compare the distances for the same amount of time: 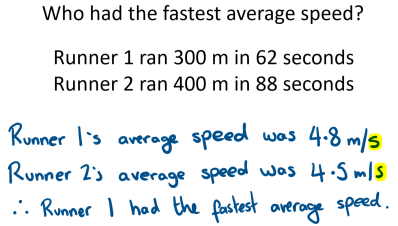 If you would like to use or share any of the images from this blog, feel free to use this Power Point to help you: ‘Many Methods: One Topic (Part 2)’